Canadian police are calling for more funding to enforce cannabis laws after legalization. Why?

“I can certainly accept that there will be some need for policing, because part of the government’s agenda is to get rid of the black market, and that’s not going to happen overnight,” he said.

In December, the Federation of Canadian Municipalities sent federal finance minister Bill Morneau its early estimates of the cost of cannabis legalization to local governments.

For each 500,000 people, the FCM calculated, local governments can expect to pay between $3 million and $4.75 million. The majority of that, $2.25 million to $3.25 million, will be needed for increased policing costs. In remote areas, warned the FCM, “per-capita costs may be higher.” (The estimates did not account for federal or provincial spending on policing.)

That might seem counterintuitive to Canadians who wonder why police will need more money, not less, to enforce laws around a newly legalized substance.

During testimony before the House of Commons Standing Committee on Health last September, various law-enforcement leaders made the case for why they need more money in light of legalization.

“We already know that major drug investigations take considerable time and specialized resources and they are very expensive to conduct,” said Mark Chatterbok, deputy chief of operations with the Saskatoon Police Service.

“Can we expect that the number of major drug investigations will increase with this legislation? I believe we can.”

“Can we expect that the number of major drug investigations will increase with this legislation? I believe we can.”-Mark Chatterbok

“There are approximately 6,000 uniformed members of the OPP who will require training on the laws and the ticketing system,” testified Ontario Provincial Police deputy commissioner Rick Barnum. “It is anticipated that there will be significant cost implications for additional training resources and tools to ensure that officers are aware of their authorities and the proper procedures.”

The $161 million offered by the federal government to help train police officers to recognize drug-impaired driving will help with training officers, but Barnum said he believes there will be other costs involved above that total.

The idea that Canadian law-enforcement agencies will need more money to police drug-impaired driving appears to be premised on the expectation that impaired driving rates will increase after legalization.

“Driving under the influence of marijuana is already a situation we are facing now, but we believe it is going to enhance the problem once it is legalized,” Canadian Association of Chiefs of Police president Mario Harel told the Canadian Press last April.

But a spike in impaired driving isn’t a guaranteed outcome of legalization, said Neil Boyd, a professor of criminology at Simon Fraser University.

“We don’t have any compelling evidence, from jurisdictions such as Colorado that have legalized, to support that claim. I don’t know that there’s reason to believe that we’re going to be facing a huge change in relation to driving,” he said.

Boyd acknowledged that Canadian police will still be spending money on enforcing the new laws.

“I can certainly accept that there will be some need for policing, because part of the government’s agenda is to get rid of the black market, and that’s not going to happen overnight,” he said.

“But why should there be an increase? We know from Colorado that the black market should be expected to diminish, people are going to avail themselves of retail opportunities to purchase cannabis (legally), and do we really want police to be spending a lot of time ticketing people for public use, for example?”

New criminal charges, such as harsh penalties for selling cannabis to minors, are proposed in the federal government’s Cannabis Act, pointed out Irvin Waller, a professor of criminology at the University of Ottawa and the author of Smarter Crime Control.

“And that will have some policing costs, if the police choose to enforce that,” he says.

But crime rates have been falling, and the best way to reduce cannabis use is by spending money on education, Waller said.

“I think what the municipalities should be doing is making sure that the federal and provincial governments are going to invest in prevention, and then they wouldn’t have to worry about policing costs, whatever their logic is.”

Waller raised the broader issue of policing costs in general.

“I think Canadian municipalities have allowed policing budgets to become unsustainable, full stop. They’ve not been controlling policing budgets like you would expect them to do, and they haven’t been investing in the well-known, well-established actions that would reduce demand for policing,” he said referring to prevention initiatives.

Criminologist Neil Boyd said some police do support cannabis legalization, but there are some who don’t like the change in law.

“All of their careers, they’ve believed that this is properly made criminal, so to sound alarms about how it’s actually going to require more policing, I don’t think it’s entirely logical, but it serves political purposes, I suppose,” he said. 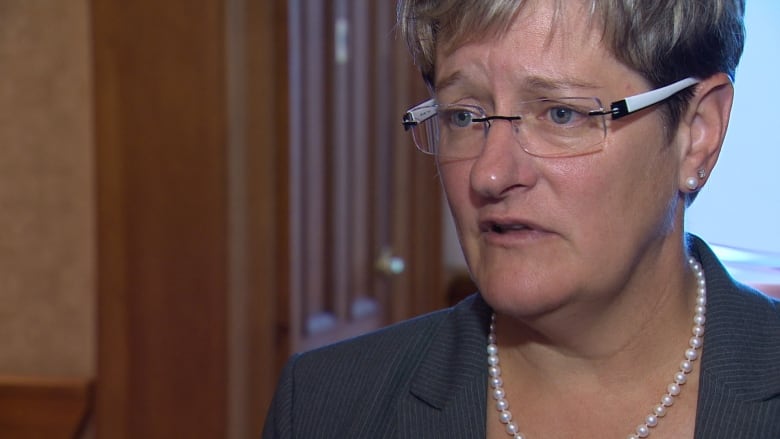 Police Chief Leanne Fitch of Fredericton says she can’t estimate how much costs will go up when marijuana is legalized but she’s sure they will. (Edwin Hunter/CBC)

Chief Leanne Fitch predicts higher costs for the Fredericton Police Force when marijuana is no longer against the law — at least in the beginning.

Most of the higher costs will be related to impaired drivers and regulatory enforcement, Fitch told a committee of MLAs studying how to regulate sales of the drug.

Manak, presenting the draft 2018 police budget to city council on Tuesday, said the upcoming legalization will increase the need for police training, the creation of education and enforcement strategies around impaired driving, the monitoring of home grow operations and dealing with minors who illegally use and possess the drug. Coun. Jeremy Loveday wanted further explanation from the chief, noting that possession will no longer be a crime.

The Ontario Provincial Police say federal funding may be insufficient to deal with the effects of incoming marijuana legalization.

“It is unclear how legalization will impact police from a day-to-day operational perspective, including how it will impact, of course, police budgets ” said Chuck Cox, chief superintendent of the OPP, at a press conference for the Ontario Association of Chiefs of Police in Toronto on Tuesday.

“Police leaders in Ontario remain concerned that the federal funding for police to deal with the anticipating impacts of legalized cannabis may not be adequate to deal with police training, procurement, and their operational needs moving forward.”

Edmonton’s property tax increase will hit 3.5 per cent this year, after council voted Tuesday to include more money in the budget for policing a growing city and regulating cannabis.

Council chose to take $2.5 million from its “snowy day” fund to help offset any further tax hikes this year associated with legalized marijuana.

After four years, cities in the United States have still not seen the black market decrease from legalization, Edmonton police Supt. Al Murphy told council Tuesday, and cases of drug-impaired driving will require multiple, time-intensive tests (including blood work) to ensure the evidence stands up in court.